Al Sampson joined the U.S. Marine Corps after graduating from John F. Kennedy High School and returned to Guam after 20 years of service.  He attended the University of Guam and worked in the banking industry for a couple years.  He worked in the Small Business Administration’s Guam Branch Office as a Loan Specialist for about four years and in 2002, transferred to the 36th Contracting Squadron at Andersen Air Force Base as a Contract Specialist.  In 2008, he transferred to NAVFAC Marianas as a Small Business Specialist.  He is currently the Deputy for Small Business and is responsible for NAVFAC Marianas’ Small Business Program.  He has a master’s degree in Business Administration and is a DAWIA Level III Contract Specialist.

Bernadette “Bernie” Valencia will be the NAWIC Guam’s speaker for the July Membership meeting to discuss “Women’s Leadership in Today’s World”.

Bernie has been a General Manager for Matson Navigation Company Guam since July 2013.  Prior to becoming General Manager, she served as the Regional Manager (Guam and Micronesia) for Sales and Customer Service back in 2008.

Bernie serves on the Guam Chamber of Commerce Board, the University of Guam Small Business Advisory Council, the Employer’s Council Board, the i*Recycle Board and the iCan Resources Inc. Board.

Bernie is a 1987 graduate of Our Lady of Academy High School (Guam) and holds a Bachelor of Science Degree in Aviation Maintenance Management from San Jose State University.

The fairer sex is what she’s called, a struggle to begin.  For in a world where man is king, its difficult to win. But tenderness and nurturing are not to be misled.  A strength and power to rule the world lie in her pretty head.

Sometimes her magic’s camouflaged, she doesn’t know i’ts there.  Caught up in daily mindless task, to dream she doesn’t dare.  Adversities and challenge are always in her way.  Any yet she knows it’s possible to change her life one day.

Every stone she stumbles on and every time she falls, it puts where she’s meant to be-appears like blocks and walls.  And yet it’s another door in spite of what it seems.  A lesson waiting to be learned, a gateway of her dreams.

Sometimes she must remind herself, the sun comes up each day.  And even in the darkest night the moon will light her way.  No rainbow comes without the storm and peace may come with wars.  Yet in her heart she knows she’ll win if she keeps opening doors.

This was an inspiration poem found and read by Ms. Jessica Barrett, Barrett Plumbing during the July General Membership Meeting.  Thanks Jessica for sharing. 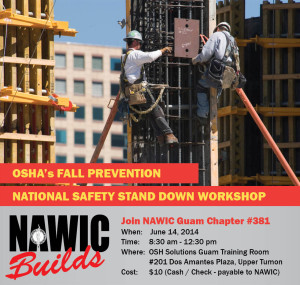 Fall fatalities accounts for more than a third of all deaths in the construction industry nationwide.  Those deaths were preventable.  In 2012, fall prevention safety standards were among the top 10 most frequently cited OSHA standards.  That same year, OSHA, in partnership with NIOSH (National Institute for Occupational Safety & Health) and NORA (National Occupational Research Agenda), started the Fall Prevention Campaign.

This year, OSHA announced the National Stand-Down from June 2 -6, 2014 focusing on “Fall Hazards” and to reinforce the importance of “Fall Prevention.”

August 2012 – The NAWIC Special Project committee tackled a big project in Simon Sanchez High School by assisting in the renovations of the Administration and Counseling offices. Our NAWIC sisters, from all facets of the construction industry, enjoyed working together. With the guidance of Sixto Quintanilla (Hawaii Rock) and students from Guam Trades Academny – our sisters took part in “hands on” demolition and erection of several partitions.

According to Marcia Mendiola, chairperson of the Special Project committee, “Working on this special project committee, and providing community service or just doing something for all of us to get to know each other was fun.”

Good job to all the ladies that participated in making this project a huge success. An excellent team effort spearheaded by chairperson, Marcia Mendiola, and co-chairperson, Jacquelyn Calvo. A huge appreciation to Ann Marie Pelabello and Sixto Quintanilla for ensuring a safe and quality work were delivered to Simon Sanchez High School.
NAWIC was able to successfully complete this project through the support of companies who donated supplies and work hours. NAWIC would like to recognize these companies for their generosity.

Do you have a group of workers who were born between 1980 and 2000? Well, welcome to the age of the Millennials. This is a different generation and you’ll need to change the way you think AND act in order to engage with them. They are the products of doting parents, structured lives, and contact with diverse people. In this discussion, we will talk about ways to engage and motivate these workers. Presented by Donna Calhoun, Baby-boomer and Daphne Leon Guerrero, Millenial!